Gooey Gut Trail (GGT) is a board game designed to raise awareness on factors that influence human gut health. It introduces players to the everyday real-world scenarios and activities that influence gut bacteria through the game components such as card decks, meeples, factor tokens and the game board. The game extends players’ understanding of gut health through the lens of food and beyond. Utilizing design fiction, the game is made relatable to the players and creates a space for self-reflection to foster a closer understanding of human-microbial interaction and its influence on gut health. GGT is part of a PhD research that investigates the design of playful technologies to understand and engage with human gut health.

“Overall, I enjoyed very much reading and ‘seeing’ this pictorial. The account of the design process is honest, and the design decisions are well justified and carried out in a truly multi-disciplinary way. I also commend the authors for addressing this often tabooed topic and for doing so with respect and playfully, avoiding to put the emphasis on illness or malfunction and towards normalizing a part of life.” 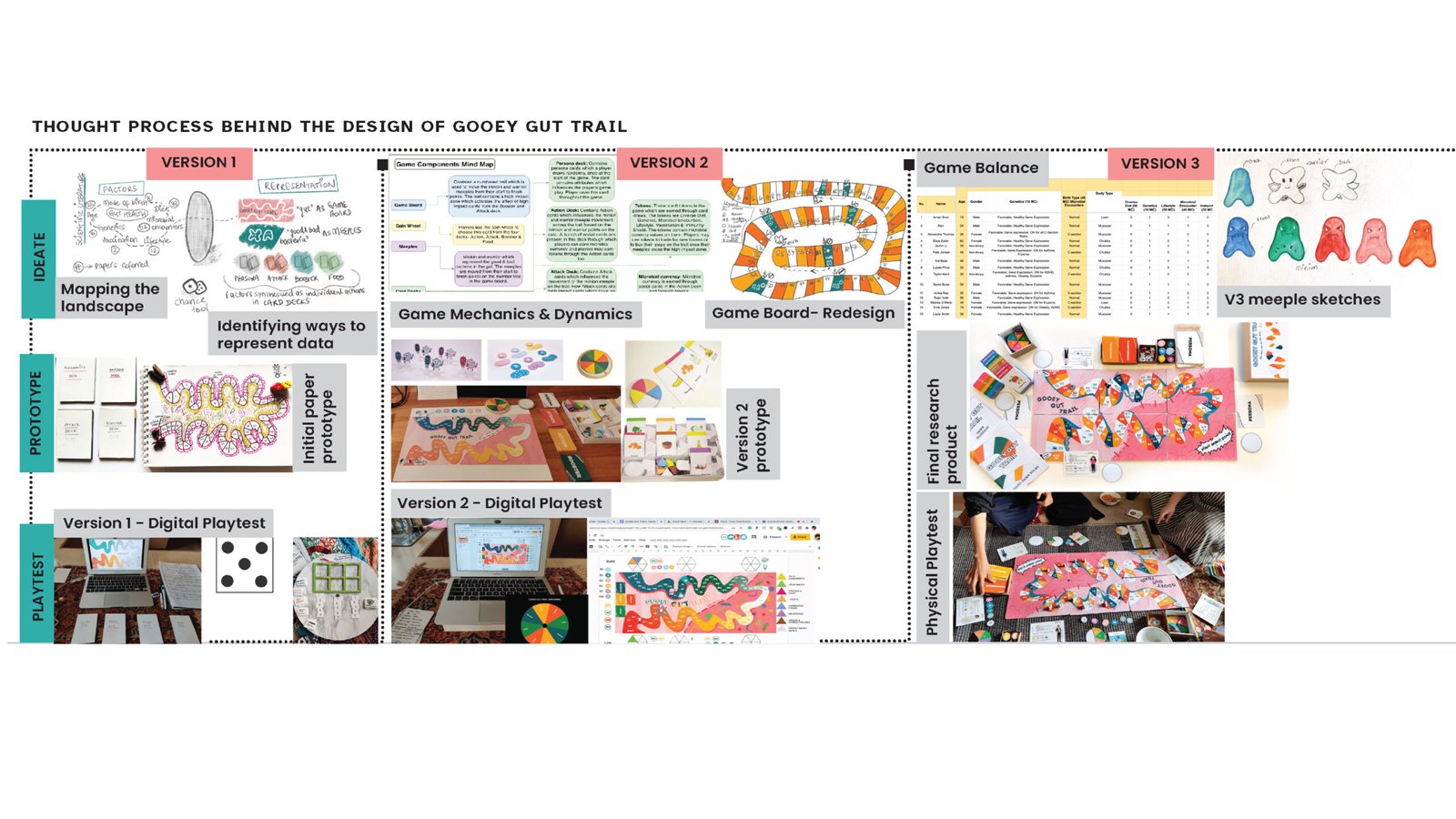 Gut health is currently a widely used term in social media, however, the understanding of factors that influence gut health is still at a nascent stage, amongst the general public. Furthermore, the traditional information sources on gut health like journals, blogs, news articles are often scientific, complex to comprehend and rarely appeal to the larger population. We approached this challenge through the lens of play and designed GGT, a research product from the HAFP Research Lab- a multidisciplinary team of researchers nested under the School of Design, RMIT University.

We used “research through design” methodology to develop the game. The iterative process resulted in three versions over a duration of 8-months. The design of GGT is informed by scientific literature from the fields of gastrointestinal health, food science, game design, psychology, sociology, product & UX design.

The game was designed in the following process:

5. Prototyping and testing conducted as a cyclical process.

The game was play-tested by the research team during the design phase using hybrid tools i.e., part-physical and part-digital. The components of the final research product were partly printed at home and partly through a commercial vendor. Other components like game meeples, food plate, wedges and component trays were handcrafted at home. The game was designed using sustainable materials such as cardboard, air dry clay, MDF board, linen bag, brown craft paper, magnetic sheets and repurposed cardboard containers to hold game components. The design goals of GGT were in alignment with the design ideals of our team that is focused on reducing the impact of our design choices on the environment.

The final research product is fully-functional, aesthetically-appealing and reflective of the theme which resulted in a seamless user-experience and meaningful feedback from users. Testing the final game through a field study revealed that users gained a new-found understanding of the intricacies involved in gut health. The user-experience of the game was positive and users reported having an enjoyable experience that conveyed scientific insights through game mechanics, interactions and aesthetics.

We further noted that important facets of the design contributed towards an increased awareness in participants, causing some participants to reflect upon their personal habits that influence gut health while motivating behavior change in others.

This research is grounded in the literature on gut health, sociology and game design concepts. Our focus on engaging players with gut health information through play remains at the level of “functional scientific literacy” – which posits that individuals should possess minimum practical skills informed through science in order to make thoughtful decisions and function effectively in a particular setting. In contrast to the traditional sources of information on gut health, we focus on engaging players through playful experiences that are grounded in scientific literature and game design. This research facilitates learning about the gut and its interrelation to factors like diet, lifestyle, environment, emotions, thus preparing players to take this experience and the gathered insights into their real-life practices.

Research suggests embedding complex science topics into the social and societal constructs of their occurrence so as to offer people a contextual understanding of the topic being communicated. The context in which information is presented directly affects the way it is perceived by an individual. It further decides the validity of information gathered, as well as its translation into real-world actions. The complexity of science topics like gut health may be appealing only to a niche crowd, for example, scholars in the medical field. However, health implications stemming from a lack of awareness on the factors influencing gut health are far-reaching. As such understanding the role of socio-spatial elements and the contexts through which factors affect gut health can play a vital role in designing playful experiences to engage with gut health factors. We integrate the real-world scenarios like bio-diverse landscapes with rich organic soil, forest air, and public spaces that affect our gut health in the game play to provide a contextual understanding of our gut health.